After numerous attempts on Charles de Gaulle’s life fail, an underground paramilitary group hire an infamous hitman, “The Jackal”, to assassinate the French President. Meanwhile, it is the task of a shrewd French detective, Lebel, to track down the enigmatic killer. The cat-and-mouse aspect of this 1970s classic is certainly its most fascinating, most intriguing feature. How our relentless detective is always within touching distance of our cunning, evasive protagonist will keep you gripped throughout.

Two Washington Post reporters, played by Robert Redford and Dustin Hoffman, work tirelessly while researching the 1972 burglary of the Democratic Party Headquarters, which was located at the Watergate apartment building. With the help of a mysterious source, referred to only as Deep Throat, the duo’s research ultimately uncovers the scandal which leads to President Nixon’s resignation. With a trifecta comprising Alan J. Pakula, a master of the political thriller genre, and Hoffman and Redford, this film was sure to succeed, not least because of the chemistry and camaraderie between the two leading men.

After the assassination of a presidential candidate, an ambitious reporter (Warren Beatty) suspects the involvement of a peculiar corporation, Parallax Corporation. As he investigates the corporation further, a bigger conspiracy starts to unravel. With a taut, intricate narrative, Alan J. Pakula doing what he does best (being behind the lens of a suspenseful political thriller), and Beatty providing a cool and collected performance dripping with self-assurance, The Parallax View couldn’t miss. 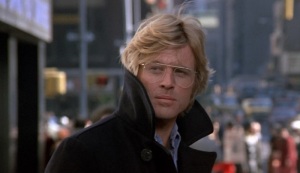 It’s a typical day at work and an incognito CIA codebreaker, played by Robert Redford, walks into the office to find that all of his colleagues have been murdered inexplicably. Having told his supervisors and realised that higher-ups in the CIA were involved in the massacre, he soon flees, while an unmerciful assassin tracks him down, and attempts to work out why his own agency would want him dead. It’s a simple recipe for triumphant cinema: Sydney Pollack helming the picture, a storyline which is both carefully considered and tense, and Robert Redford, who, quite simply, couldn’t miss in the 1970s.

The carefree, insubordinate Harry Palmer (Michael Caine), a British spy working for the Ministry of Defence, is given the task of investigating the disappearances, and seemingly brainwashed reappearances, of top-level scientists.  After watching The Ipcress File, did I again want to hear Michael Caine delivering dry, British witticisms in the most nonchalant of manners? Yes, I did. Though not the archetypal, world-saving leading man whom one would expect, his ability to command a picture is unparalleled.

iThere are no comments